"Luxury dish in street food prices" was the tag line of the Batu Street Food & Culinary Festival 2021 that was held on December, 7th - 8th 2021 in the front yard of Among Tani Town Hall. ristar Institute Batu as the best culinary and tourism college in Indonesia, presented a variety of authentic old taste and local delicacy.

Learning doesn’t have to be in the classroom. Learning can be done anywhere and anytime. Tristar Institute Batu students had a factory visit to learn about wine production in Sababay Winery, local winery factory in Buleleng Bali on Tuesday, October 29th, 2019.

Sixty students of Tristar Institute Batu departed from the campus at Jl. Bukit Berbunga No 10-12 Sidomulyo Batu on Monday afternoon, 28th October 2019 by bus. They arrived at Bali on the following day and directly went to Sababay Winery that day. 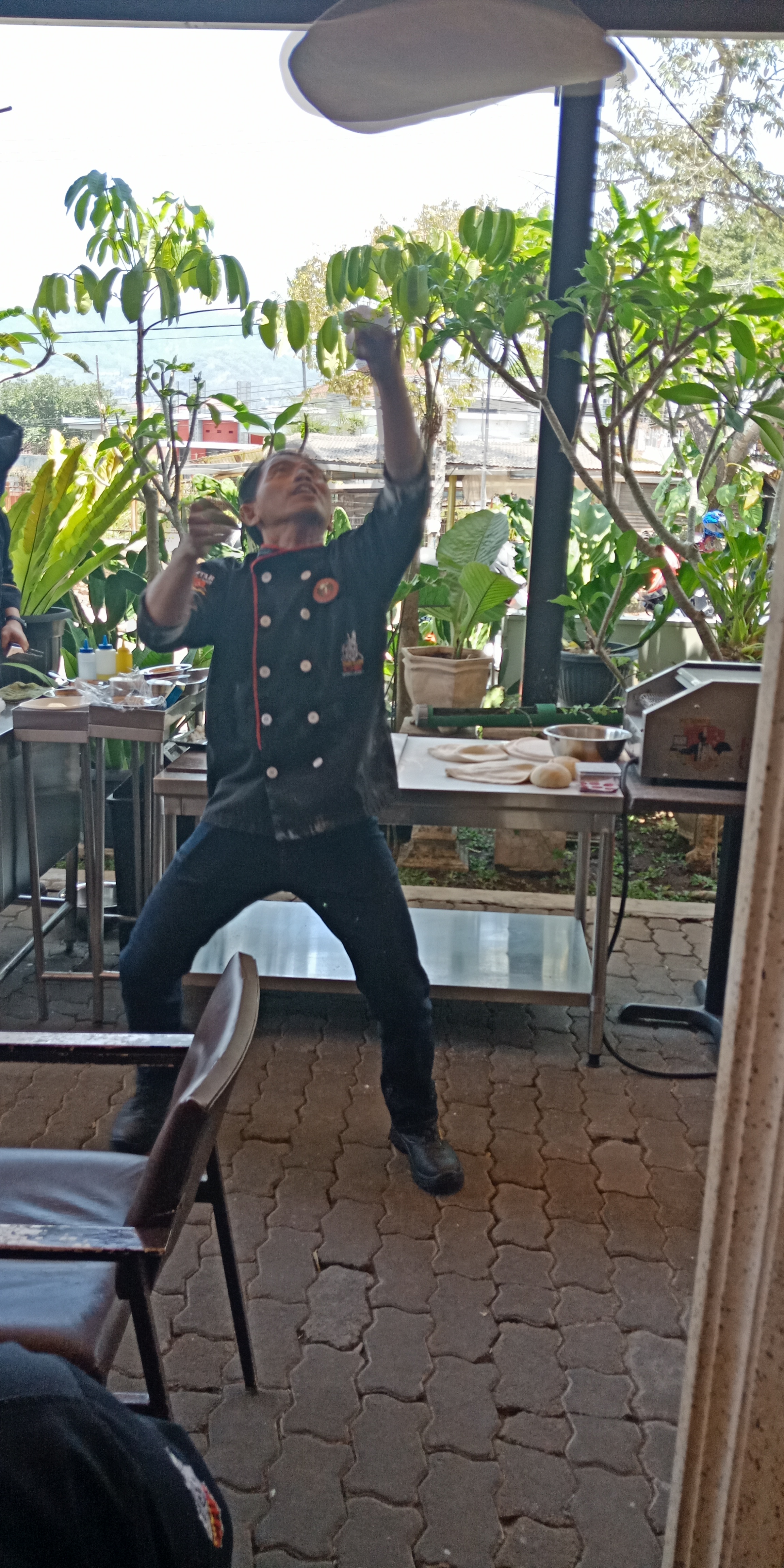 A Visit from The Batu Tourism & Culture Officers

The head of the Promotion and Marketing division at Batu City Tourism and Culture Office, Catur Puspo Asmoro, S.Sos, M.AP requested Tristar Institute Batu to perform All Out at BATU STREET FOOD FESTIVAL.

Mr. Catur Puspo Asmoro, S.Sos, M.AP, and his staff came directly at Tristar Culinary Institute Batu campus on Monday (10/14/2019) after being invited. His arrival was accompanied by Liza Yossana Lucas, the Section Chief of Market Information and Analysis, Ni Luh Made Anggraini, the Section Chief of Promotion and Cooperation, and F. Yanareka, the staff of Market Information and Analysis section. All of the guests were welcomed by the head of Tristar Culinary Institute Batu, Chef Yuda Agustian, A.Md. Par., S.T.P., M. M.Par, along with the vice head, Chef Lily Andayani, S.T., M.M.Par, and the lecturers, Chef Thomas and Chef Agung Kurnia.

Indonesia’s Ministry of Tourism set 30 dishes as the archipelago’s quintessential food. Among them are Soto and Satay. These two culinary dishes have dozens of versions. Some of them were displayed by Tristar Institute Batu students at the Soto & Sate Festival on Wednesday (8/21/2019).

For two days, Tuesday and Wednesday (20-21/8), Culinary Art students at Tristar Institute Batu held a special event: "Tumpeng, Soto and Sate Festival". The event which was held at Jl. Bukit Berbunga 10  was aimed to enliven the 74th Indonesian Independence Day. 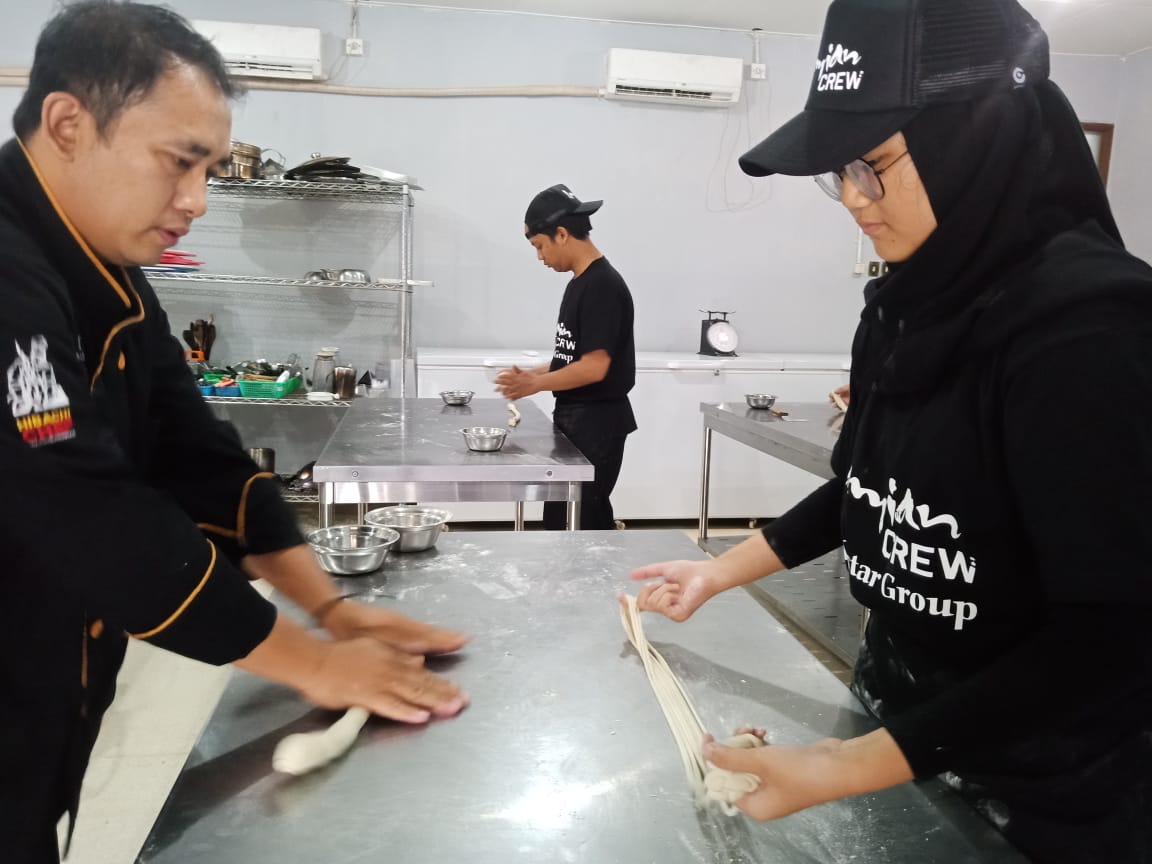 Producing noodles doesn’t always require a machine even a factory. You can make noodles with just your bare hands. Are you interested? Join our La Mian Training Program. Believe it or not, only in 6 meetings, you will be able to make your own noodle.

Noodles which are made just by using bare hands are known as La Mian (hand-pulled noodles). Its basic ingredients are very simple: high protein flour, mineral water, salt and eggs mixed together to make the dough. 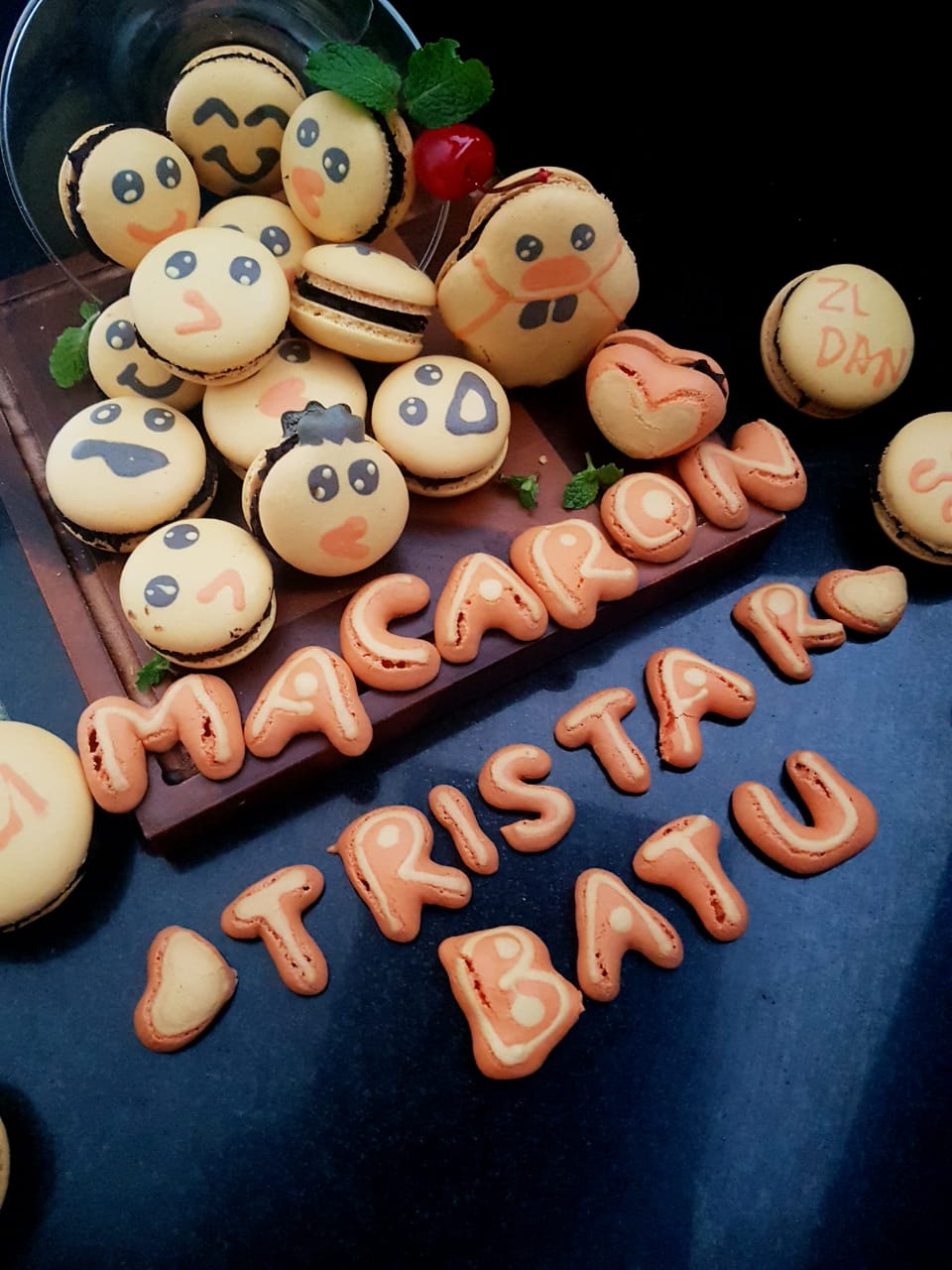 Cookies are the best choice of snacks served in gatherings, family events, weddings and even on special occasions such as Eid, Christmas or Chinese New Year. From time to time, cookies business thrives especially in Indonesia. Creativity and innovation in the business continues to increase which never makes costumers get bored.

Knowing the bright prospect of the business, Tristar Institute Batu provides its Baking and Pastry Art students with Cookies materials in the curriculum

Minceur cuisine, which means "slim cooking", is a kind of cuisine popularized by Chef Michel Guerard in the 1960s which focuses in modifying French cooking techniques by using little fat, salt and sugar yet does not sacrifice the taste and pleasure of the cuisines.

Stefani Horison is known as an independent, smart, diligent and creative student. The impression was conveyed by two lecturers of Akpar Majapahit, Chef Lily Andayani and Chef Laurentia Vivi.

The girl who has an oriental-look from the Chinese, Javanese and Dayak descent was raised to be independent. The second child of three siblings of Subenho (52) and Maya (51), lived in Surabaya since high school while his parents settled in Sampit, Central Kalimantan.

Students of Baking and Pastry Art in Tristar Institute Batu were challenged to decorate Showpiece Cakes. They were free to choose the themes and decide the decorations.

Challenge was given by the Baking and Pastry lecturer, Chef Lily Andayani ST. M.Mpar, to seventeen Baking and Pastry Art students to create two showpiece cakes. The students’ abilities to create ornaments and a dynamic blend of colors had succeeded in beautifying their Showpiece Cakes. Read more to see the result.

One Day Hotel Tour – Learning from the Experts

Students not only learn in campus, but they need to know the reality in the work field and learn directly from experts. This method was implemented at the Tristar Institute Group, including at Tristar Institute Batu.

On Thursday, April 25, 2019, students of D3 Hotel Management conducted a study tour at éL Royale Kartika Hotel Batu. Thirty two students participated in the tour  and they were accompanied by Miss Andista, an English lecturer, and R. Paulus W. Soetrisno M.Par, a lecturer who was also the Head of D3 Hospitality Program at Akpar Majapahit.

Gravity Defying Cakes are variations of cakes decorating techniques which are currently trending worldwide because of their stunning ideas and looks. They are also popularly known as Anti-Gravity Cakes. The stunning cakes are perfect for birthday events and delight kids and even grown-up. To keep up with the current trends, Tristar Institute Batu includes this cake decorating technique in the curriculum of D1 Pastry and Baking Arts program.

On the 18th of March 2019, students of Baking and Pastry Arts got the material of how to make Gravity Defying Cake.....

Lontong Cap Go Meh is a set of meal of some dishes traditionally consumed during Cap Go Meh celebration in Java. Cap Go Meh itself is derived from the word “Cap Go” means “fifteenth” and “Meh” means “night” in Hokkien dialect. Just like its name, Cap Go Meh is celebrated on the 15th day after Imlek by the Chinese decendents in Indonesia.

On the Cap Go Meh day, Indonesian Chinese decendents in Java usually gather with their families and serve special dishes called as Lontong Cap Go Meh.  The dishes are combination of several fusion dishes of Chinese and Javanese Cusines.

Soto and Sate (Satay) are similar to pronounce, yet they are completely different kinds of Indonesian dishes. Soto is a kind of soup made of broth while Sate is a skewered and grilled meat. If we talk about their similarity, both of them are considered as Indonesian national dishes as it is served in every parts of the country, from Sumatra to Papua, in a wide range of variations.

Being famous as a country with rich of cultures, Indonesia is also known as a paradise of traditional cuisine. A lot of traditional dishes are influenced by and related to cultures in this country. One of the famous dish is Tumpeng. Tumpeng is a tall cone-shaped rice dish served on a wide woven bamboo tray called Tampah. Originally, Tumpeng has Javanese root but in 2014 the Indonesian Ministry of Tourism and Creative Economy promoted it as one of the official national dishes of Indonesia.

Under the theme Explore East Java, this year Tristar Food Vaganza was supported by the Batu City government. It was shown by the presence of Batu City’s Mayor, Eddy Rumpoko, at the event. He said that the existence of educational institutions, like Tristar Culinary Institute, in Batu City was very in line with the dynamics of Batu's tourism. Other appreciation was also expressed by the representatives of Batu Tourism Office and Batu Education Office when giving speech at the beginning of the event. In addition,  Pamungkas, the representative of Indonesia Chef Association (ICA), stated that Tristar Culinary Institute as the educational institution was able to create the next professional chefs in Indonesia.

Among the thousands of Indonesian culinary, Soto is a dish that can be found in almost all parts of the country. Different province presents different variations of Soto with its own style in the processing and presentation of this comfort food. For this reason, Tristar Culinary Institute Batu explored and introduced the diversity of Indonesian Soto at the 'Nusantara Soto Festival 2018'.

On Thursday (8/3), Culinary Art students learned Indonesian Cuisine. As Soto was the main topic for the meeting that day, the students cooked numerous kinds of Indonesian Soto. For example, Mi Soto and Coto Makassar.  Mi Soto (Noodle Soto) from Bogor, the rainy city, has unique taste and uses yellow noodle in it. In addition, this Mi Soto is uniquely served with Crispy Risol as complement. The other kind of Soto is Coto Makassar which consists of meat and some offal and uses special spices. Its delicious savory flavor is able to make its connoisseurs be addicted.

The fragrance of typical Javanese herbs and spices were spreaded and filled all corners of the culinary kitchen on Monday morning (5/3/2018). The voice of pestles that collided with the mortars also heard at one corner of Tristar Culinary Institute Batu. All students deftly processed various ingredients of meat, vegetables, rice and spices and served them into a Tumpeng, an Indonesian National dish.

Tumpeng Festival was the starting point for the 2018 Festival Week at Tristar Culinary Institute Batu. The event was held to give opportunity for students to show their skills in creating dishes that are often served at celebration and ceremonial events. Besides, through this festival students could also exhibit their work and be evaluated by public.

If we hear the word “Yogya” or “Jogja”, surely one thing that comes to our mind right away is its traditional food that spoils our tongues. For this reason, Tristar Culinary Institute Batu chose Jogjakarta’s traditional cuisine as the theme in the 2017 food festival. The famous dishes from Gudeg, Bacem Telur, to Sambal Krecek were all served in 2017 Jogja Festival and held at Jl. Bukit Berbunga No. 10.

Satay. One word that might remind us with Madura island. But do you know that other places also have satays? In fact, in all around Indonesia there are dozens of types of satay exist, not to mention the variety of satays in other parts of the world. Therefore, in order to introduce various kinds of satay in Indonesia and the world, Tristar Institute of Batu City Tourism held “2017 Nusantara Satay Festival”.

The chunks of meat were stabbed in bamboo skewers and then burned on a burning flame, covered with flavorful thick spices. Can you imagine it?